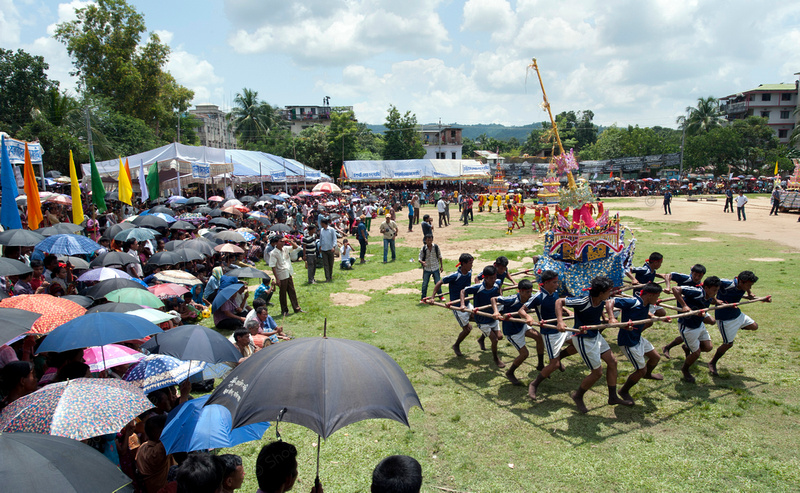 THE FINAL JOURNEY OF A TRIBAL KING

Visitors 55
13 photos
The King has passed away, but the reminiscences of him lingers. He, Raja Aung Shoi PrueChowdhury, was a highly popular leader among his wards as well as the members of the communities other than his own Marma clan. He was a member of a long lineage of Kings derived from an Burmese-Arakanese origin. Officially, he was entitled as the Bomang Chief. The ward ‘Bomang’ is derived from the Arakanese word ‘Bohmong’ which means a ‘great general’. Once upon a time in remote past the whole of his territory of Bandarban hill district and the adjoining areas were called as the ‘BohmongHtaung’ or the bomang land.
From the time immemorial Bandarban has been the homeland of about a dozen indigenous ethnic peoples. They collectively identify themselves as the Jumma people, the first people of the CHT. They are the Chakma, Marma, Tripura, Tanchangya, Mro, Lushai, Khumi, Chak, Khyang, Bawm, Pankhua, Mizo etc. The Jumma people are distinct and different from the majority Bengali muslim people of Bangladesh in respect of race, language, culture, heritage and religion. All these ethnic peoples always have shown their unquestioning allegiance to the Bomang Kings.
According to traditions, the Bomang Raja or Circle chief collects taxes from the 'Headmen' ('Mouza' chiefs) and 'Karbari' (Village chiefs) at the royal function. Indigenous men mostly 'Jum' farmers pay annual taxes to their respective 'Headman' (head of a ‘mouza’ or group of villages) and 'Karbari' (head of a village), and the accumulated funds are offered formally to the Circle Chief (The King) during 'Rajpunnah', the annual tax giving festival.
The situation in Bandarban as well as the CHT is completely changed since Raja AungShoi was born about a century ago. At that time, the tribal or ethnic communities were the vast majorities in CHT including Bandarban. In a census of 1872, it was found that only 2% of CHT populations were non-indigenous and the rest was indigenous. Till 1951, more than 90% of the total population of CHT was indigenous. But due to demographic engineering, this overwhelming majority declined drastically and that reduced to 51.4% in 1991. Besides the demographical changes, ownership/control overland in CHT also changed dramatically. Prior to colonial annexation most of land of CHT belonged to indigenous peoples but gradually it was replaced by the control of forest department. Till British colonial annexation access to land and its administration in CHT was totally based on the Customary Laws and practices of the peoples concerned and their Chiefs (Kings).
For the last fifty years there is political and ethnic conflict in Chittagong Hill Tracts. The conflict is among the indigenous people and the migrated Bangali people. The government tried to solve the problem in political process and even in martial process. Raja AungShoiPrueChowdhury was respected and accepted by both the indigenous people and the Bengali people as well. Raja’s role in establishing peace in Chittagong Hill Tracts was quite significant. In his absence the peace process might be hampered.
Raja AungShoi breathed his last on August 8, 2012, at the ripe old age of 98, in his royal palace situated in Bandarban town, the headquarter of Bandarban hill district of Chittagong Hill Tracts, lying in the southeast corner of the country.. He is survived by wife, six sons and two daughters. The body of the king was preserved inside the royal palace almost for a month to be paid homage by his wards and other guests. Than the body was broughtat noon on August24, 2012 to an open ground in a peacock-shaped chariot, where different cultural groups of different ethnic communities performed traditional dances.Afterwards the body was taken to Central Buddhist Cremation Ground around 5:00pm for cremation.
Raja AungShoi was born on August 1, 1915, and was sworn in as the 15thBomang Chief on November 19, 1998. He was an elected lawmaker twice in 1970 and 1984. He had also served as the state minister for food during the second half of 1970s.
The death of a king, or monk, or some other distinguished person of course is an occasion of grief, but side by side an occasion of festivity also. Because the Marmas, which is the own tribe of Raja AungShoi, and some other fellow tribes that follow Buddhism, believe that the death is the `mahanirban’ ( great freedom) of soul, which should be celebrated in a befitting manner. That is why the local tribes celebrated the occasion with songs. dances, fire crackers and flying lanterns.